HAWEKA HISTORY – HOW IT ALL BEGAN

The international orientation is forced early on. The first exports to Austria, Denmark, the UK and the Benelux countries followed.

The hub centering undergoes a volume development in the vehicle field. A high demand for professional clamping devices “made by HAWEKA” emerges.

First exports to the United States of America and increase in the number of employees to seven.

A new building is needed in addition to the increase in the number of employees. The first hall is built and occupied in the Schulze-Delitzsch-Straße. It has a total of 600 m².

HAWEKA Werkstatt-Technik GmbH (Workshop technology) is founded. This enables HAWEKA to build on its recognized position in the field of workshop equipment for the tire service in Germany.

The world’s very first quick-action clamping nut is developed by HAWEKA and helps reduce the set-up times when balancing by 50%.

The rapid development of HAWEKA is also recognized in politics. The lower Saxon’s Prime Minister, Dr. Ernst Albrecht, comes to visit and informs himself of the successful activities.

The revolutionary developments of HAWEKA do not end there. The DuoSPT, which is a self-centering sleeve designed for wheel alignment, appears. Another innovative product: the Uni Synchro. A universal clamping device for closed rims (suitable for 3-/4-/5-hole rims). HAWEKA brings an improved motorcycle clamping device onto the market.

Despite the three phases of expansion, the site located at Schulze-Delitzsch-Straße still turns out to be too small. The current company main office situated in the Kokenhorststraße is constructed. A modern Building complex with offices, workshop, warehouse and showroom is built. After the fall of the inner German border, HAWEKA recognizes the opportunities and supports the new partner, HAWEKA Werkstatt-Technik Glauchau GmbH in the development of a professional sales organization in Saxony.

The ProClamp axle measurement clamp sets new standards outside the range of clamping devices. ProBike, the new motorcycle clamping device is introduced to the market. 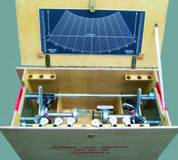 Foundation of HAWEKA AG Holding. Taking over of the Bierwirth suppliers in Herzberg am Harz with the aim of realizing expansion plans.

Expansion of the HAWEKA AG management through inclusion of Sam Bachir.

Fusion of all the companies in the HAWEKA group to what is now known as HAWEKA AG.

AXIS4000, with an integrated camera and wireless technology, sets new standards in the application and user interface in axle alignment of vehicles.

HAWEKA also sets new standards in the commercial vehicles’ frame alignment with CMC4000. The innovative products of HAWEKA, "Made in Germany", are recognized worldwide and take over the market both with OEMs as well as the aftermarket. Patents secure the essential product features for HAWEKA for the future.

The new SoftGrip which is a further development of the now well-known ProGrip quick-action clamping nut, comes into the market with improved properties.

The new wheel alignment system AXIS2000 will be presented for the first time at Automechanika 2018. It is a further development of the laser wheel alignment.

QuickPlate - the new generation: Introduction of the new QuickPlate V

We are available Monday to Thursday

The HAWEKA system AXIS4000MB of wheel alignment for commercial vehicles is now homologated for all Mercedes-Benz service points worldwide.

You consent to our cookies if you continue to use our website. Further Information can be found here.